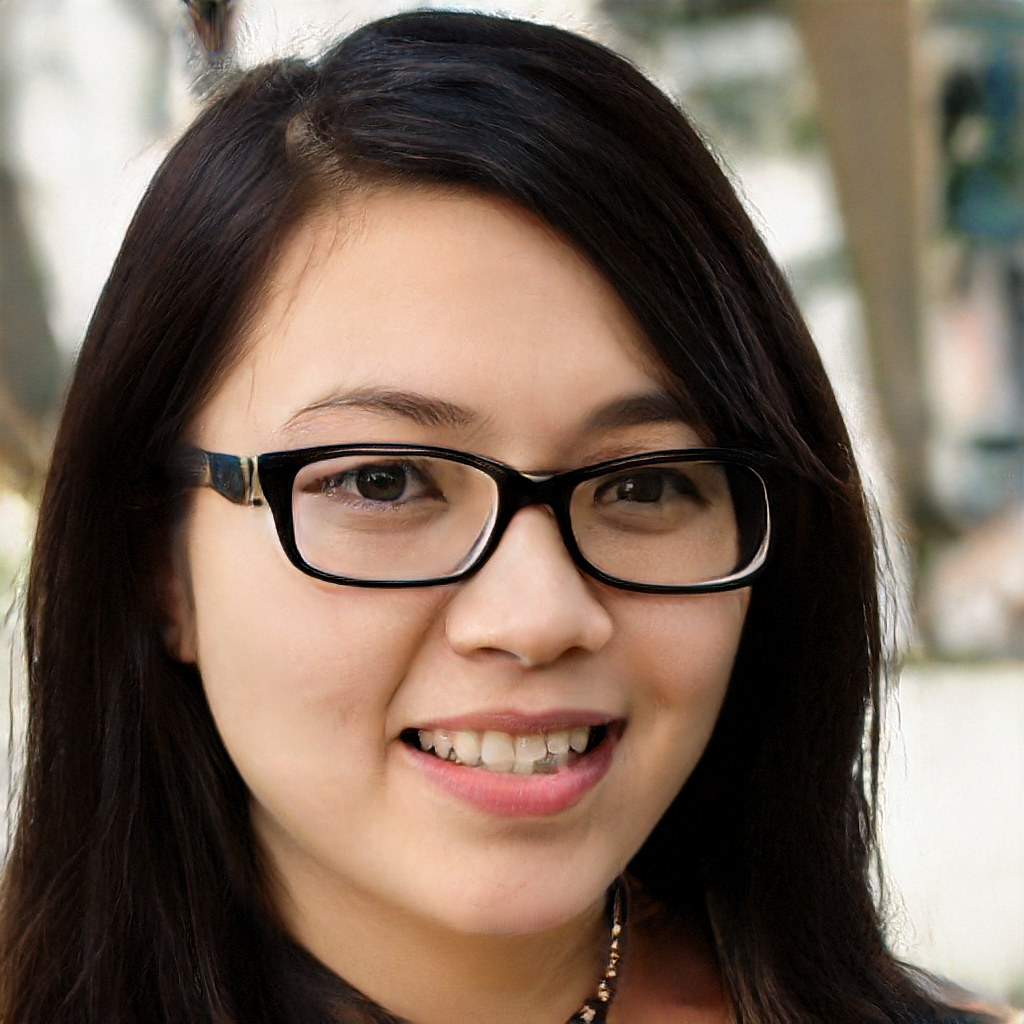 Starting from Sirmione , the most beautiful villages of Garda line up on the shore, connected by a road that in the first section rises and descends from gentle hills dotted with olive trees, vines and cypresses, while in the final stretch, from Gardone to Riva del Garda , it runs alongside to the lake along the steep mountains of white limestone that overhang the waters.

The atmosphere is Mediterranean due to the sun that spreads in the vast basin of the lake which, especially with a little mist to conceal the opposite shore, seems like a sea ; but also for the vegetation and for the breeze that always blows. Fascinating then the landscape and the well-known villages such as Sirmione, Desenzano and Gardone and beautiful to drive the road that with sinuous curves overcomes the morainic hills and with rapid straight stretches along the shore.

Our itinerary starts from the A4 Milan-Venice motorway at the Sirmione exit ; leaving the junction, turn right towards Sirmione and soon the wide luminous basin of Lake Garda appears, the mildest of the northern Italian lakes.

Already going along the narrow isthmus that connects Sirmione to the mainland opens a vast panorama of the wide southern basin of the lake and already the vegetation lets believe to be in Liguria rather than behind the Alps. Sirmione is perhaps the most evocative place of Lake Garda , built at the end of a peninsula and already renowned in Roman times (Catullo celebrates it) when various villas were built and then in the Middle Ages an important Scaliger and then Venetian stronghold. The Rocca Scaligera (1259) is remarkable , a well-preserved and well preserved castle that defends access to the citadel; continuing we meet the church of S.Maria Maggiore(XV century), the sulfur water spas, the Romanesque church of S. Pietro in Mavino of the century XII and finally, on top of the promontory, the ruins of a Roman settlement.

Resuming the bike we head to Desenzano which is reached in a quarter of an hour. Leave the motorbike in the parking lot next to the pretty inner harbor and take a stroll along via Roma and via S.Maria surrounded by old houses (including the palace of the Provveditore Veneto of the XVI century and the remains of the Roman villa with interesting mosaics) until to reach the castle at the top from where you can enjoy a beautiful view of the village and the lake.

Continue for the Garda areaalong a section that ascends and descends through hills dotted with olive and cypress trees until it descends with a few hairpin bends to Salò , an important town in the Middle Ages (in the 14th century it was the capital of the Magnifica Patria, a league of municipalities independent of the Viscontis and Venetians) and today a major tourist center. On the beautiful lakeside promenade is the 14th-century Palazzo della Magnifica Patria, the Palazzo del Capitano and the Venetian Rector and the Duomo in 1453.

Continue on to Gardone , a lively lake village with beautiful houses overlooking the lakefront. On the hills behind the village is the Vittoriale , the extravagant residence where Gabriele D'Annunziohe spent the last years of his life: in addition to his house (with all the original furnishings) he visited the ship Pola (which he had himself partially rebuilt), the Mas della Baffari hoax, the theater, the tomb of the poet placed in top of the hill and surrounded by the urns of the legionaries of the Fiume company. Not far away is the Hruska botanical garden , rich in 2000 plants. Resuming the motorbike, we soon reach Maderno , also this important village in the Middle Ages (it was the capital of the Magnifica Patria before Salò) which today preserves the Romanesque church of S. Andrea (12th century), one of the most remarkable in the area: beautiful as always the lakeside promenade.

Continue along the road that runs alongside the shore with beautiful views of the lake that narrows here and Mount Baldo on the Venetian shore. Here begins the most beautiful stretch to drive : the road closely follows the shore, sometimes on the surface of the water, sometimes rising and entering the tunnel as the mountain approaches ever more steeply to the lake, offering scenarios of suggestive beauty. We pass Gargnano (here Mussolini had his residence in the days of the Republic of Salò), Campione del Garda and we reach Limone: in this section, pay attention to the narrow streets that go down to the lake, reaching isolated beaches among the rocks, ideal for a swim. Limone is today a renowned tourist resort but in the past, as the name suggests, it was a center of citrus cultivation thanks to the extremely mild climate of the lake which also allowed an important production of olive oil.

We continue along the road always leaning against steep walls of light rock and we finally reach Riva del Garda , another important tourist resort frequented by German tourists coming from Brennero and by lovers of wind surfing and kite surfing who find here ideal conditions of wind. 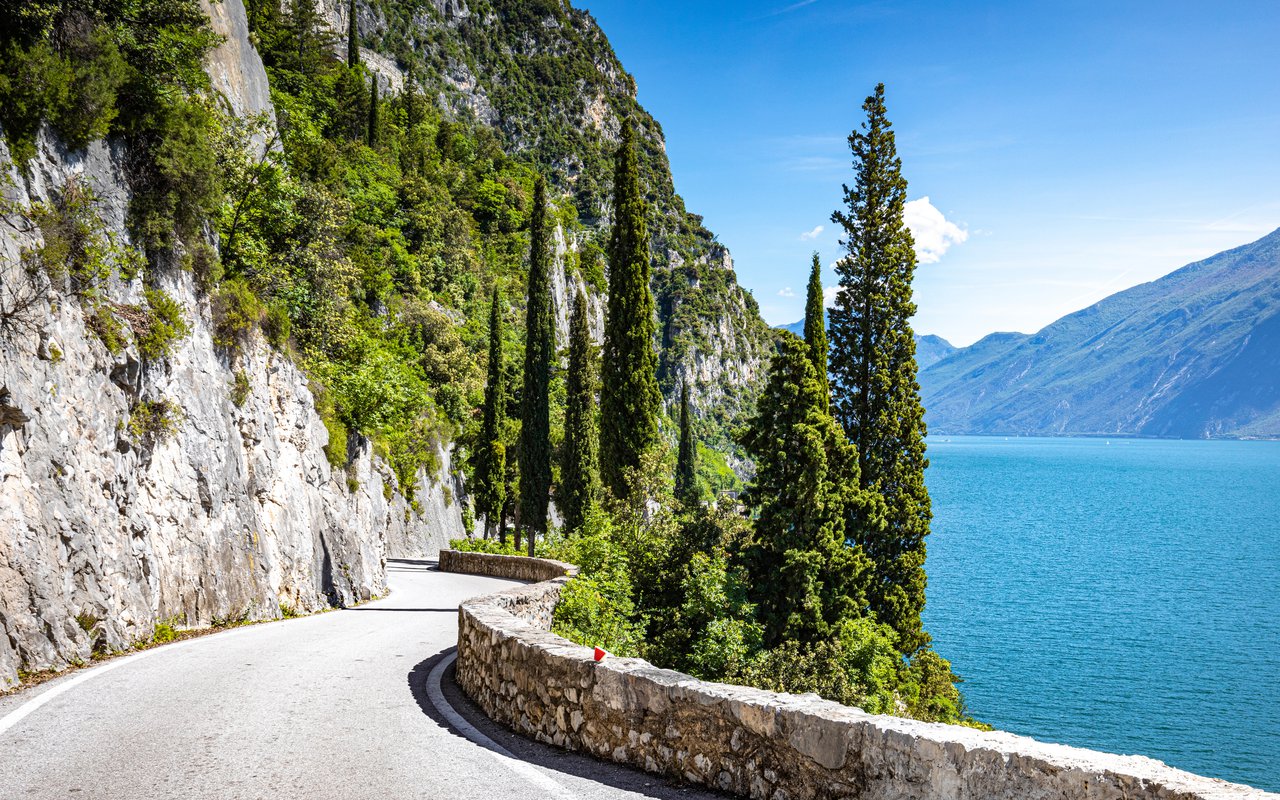 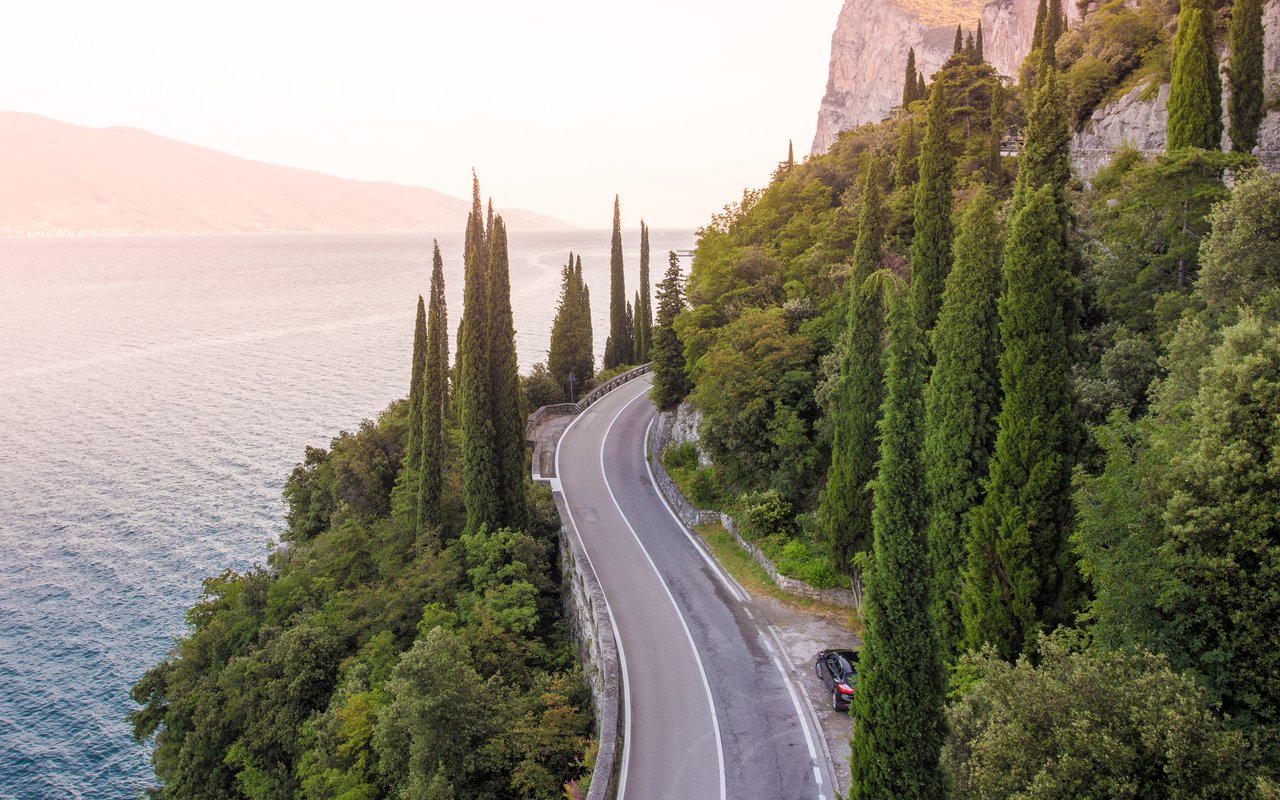 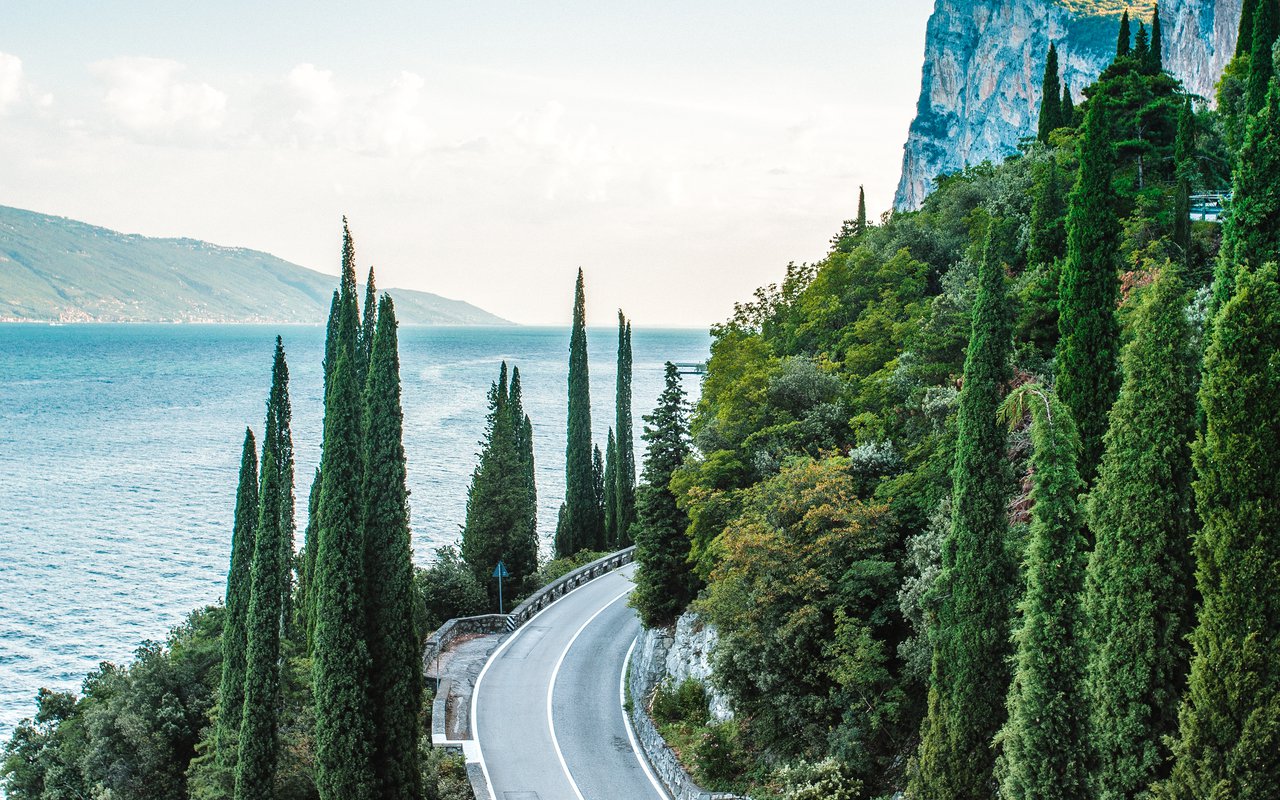